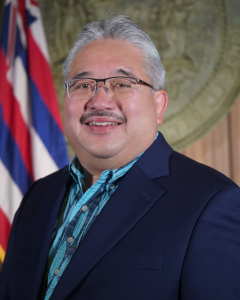 The Board of Education on May 19, 2022, voted to hire Keith T. Hayashi to lead Hawai‘i's public school system as superintendent for a term to begin July 1, 2022.

Hayashi, who was tapped from his position as principal of Waipahu High School to serve as interim superintendent on Aug. 1, 2021, was one of three finalists for the permanent position.

Hayashi's 32-year career with the Department spans the school, complex area and state level. He led Waipahu High School as principal since 2009, a position for which he received numerous awards, including Hawai‘i High School Principal of the Year and the collegiate Shirley B. Gordon Award of Distinction. He is credited with pioneering the Early College program in Hawai‘i public schools and earned the distinction for Waipahu High as the state's first nationally recognized wall-to-wall academy model school.
​
Hayashi began his education career at Lehua Elementary as a teacher and went on to serve as a district resource teacher in Leeward O‘ahu. He also served as a vice principal and principal at the elementary, middle and high school levels before becoming Pearl City-Waipahu Complex Area Superintendent. At the state level, he served as interim deputy superintendent and as interim superintendent in 2017. Hayashi earned his bachelor's degree in elementary education from the University of Hawai‘i at Mānoa. He also holds two Master of Education degrees — in curriculum and instruction, and educational administration — from UH Mānoa.